New, Extra Heavy-Duty 13' long SK385XL Wilderness series Inflatable KaBoats comes with large 16" diameter tubes and spacious interior. That make the SK385XL KaBoat excellent for remote explorations, hunting and fishing in the remote wilderness. This KaBoat model was specifically designed for use in Alaska's shallow rocky rivers. SK385XL lighter and smaller than similar type SK470XL KaBoat, and therefore is easier to handle by one person. Air floor is removable and can be protected with marine carpeting or vinyl flooring from local hardware store against accidental punctures by heavy and/or sharp objects.

SK385XL KaBoat comes with 4 separate air chambers for extra safety, compared to 2 standard chambers of regular sized KaBoats. KaBoat will still be operational even if one of chambers deflates. Extra heavy-duty rub strake protectors are installed along both sides of the tubes for maximum durability. 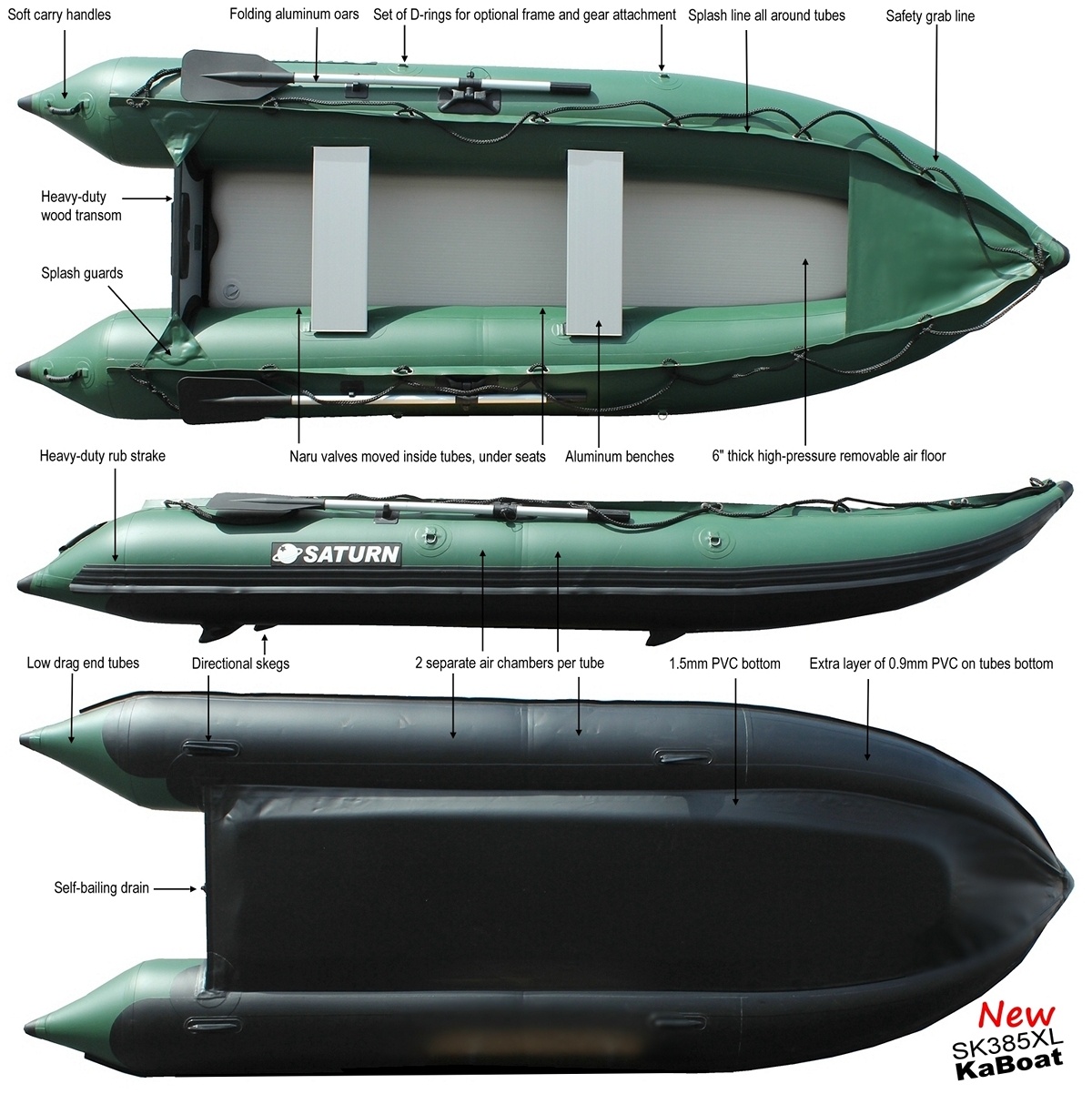 Quick Tip: If you are worried about the air floor being accidentally punctured by sharp gear or fishing hooks, you can get a piece of vinyl flooring from a local hardware store that can be cut out to fit inside the KaBoat over the floor. 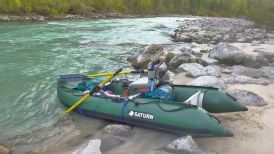 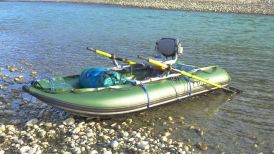 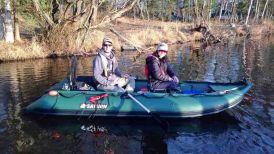 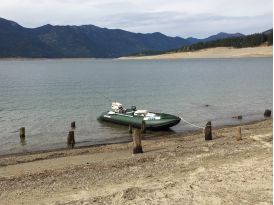 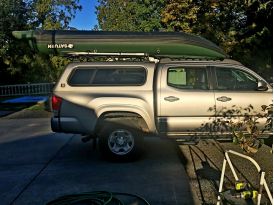 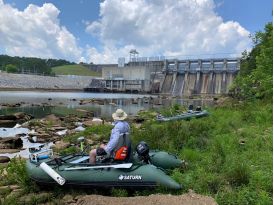 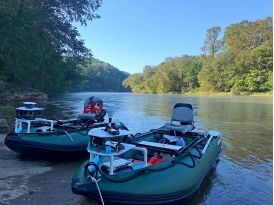 Saturn SK385XL KaBoat
Color:
Green
Shipping Size:
45x26x15"
Shipping Weight:
100 lbs
Exterior Length:
13'
Interior Length:
10'
Material:
1100 Denier PVC. Double Layer PVC On Bottom Of Tubes
Exterior Width:
50"
Interior Width:
18"
Tube Diameter:
17"
Air Chambers:
4 + 1
Floor Type:
140mm Air Deck
Person Capacity:
2 + 1
KaBoat Weight:
90 lbs
Weight Capacity:
900 lbs
Engine Capacity:
10 HP
Jeff H. 11/27/2018, 05:05 PM
I bought a used Saturn kayak and then found BoatsToGo to buy a KaBoat. I’m glad I did! BoatsToGo was easy to order from had a great price and the boat arrived just as expected. I ordered a SK385XL and couldn’t be happier. The boat inflates easily is stable and rugged. I’m able to put it right on top of my truck to even make things more convenient. I’ve used a 4.5hp on it and it works good, I plan on putting an 8hp on it next and should work even better. Thanks BoatsToGo and I’ll be ordering other things I’m sure.


Tom G. 05/01/2018, 11:23 AM
Excellent in every way! Strong, Great fabric, used many times. Full time RV user. It does not take up a lot of space in our RV, which is the reason we bought the Kaboat. recommend it if you want something you can easily take around. Everything is easy to clean and store away.
Jeremy Francis 02/20/2018, 08:15 PM
This is a great boat (or Kaboat)! I purchased this Kaboat for the sole purpose of fishing with my kids out of it. Myself and my two daughters fit great and the boat is incredible stable! Very impressed. The quality of the material is top notch, and well made. We also purchased and installed the wheels, which made for a great addition to our watercraft. We’ll add a trolling motor next, but the oars are handy as well. Love that they fold back out of the way and are attached to the boat. Can also be detached if you chose to use a longer kayak paddle. The bag is super easy to use, and the boats deflated quickly to be folded back into the bag (size). Overall, I would highly recommend this boat, and we are very happy with our purchase!!!
Eran Wilkanski 01/06/2018, 11:22 AM
This is one of the best boats i have ever owned!...handy and very functional!...I'm 58 years old, and I can't carry just any boat...you can feel like a fish in water with the Kaboat...I'm very happy and strongly recommend it to everybody!..Thank you!..
Leslie Hoover 09/02/2017, 11:21 AM
Calling it a combination of a kayak and boat is a perfect description. Very aerodynamic that it cuts through the water with ease when I want to go fast. But even though it’s thin, it’s still very stable like a regular boat. I stuck an outboard engine on the back of it because sometimes I’m feeling lazy. But if I want the workout, I just lift the motor out and paddle away. Pretty great to have both options.
Ron B. MSG US Army (Ret) Lebanon, Oregon 10/23/2016, 02:27 PM
Thought I’d provide y’all some feedback on your product,. “LOVE IT” and the quality of support I have received from you. I fish the North and South Santiam Rivers in Oregon, which in the summer can run pretty low…had some concern over the length of the skegs and their ability to clear the shallows. I found that as long as you don’t try backing through or broadsiding (have done both) there is no problem, other than the occasional bump as one passes over a large rock. The inflatable floor is awesome…never thought you could be stable and confident standing on an inflatable floor and as I frequently choose the gnarliest course through a rapid, the water that I take in quickly disappears beneath the 6” floor leaving my carpet high and dry. I’m still amazed at how much water I drain at take out without realizing it was there.\r\nFor my purposes and comfort, I’ve made some modifications…As with most inflatables, seating never seems to be in the right spot (or won’t support a fishing seat) and the fixed oar system can cause serious problems on a swift moving river {if ya stick an oar). Ive added a rowing frame with a home made river anchor system, a 2.5hp Lehr propane outboard, and a functional boat seat sunshade (patent pending).\r\nBottom line, I Love My Boat! Attached a short clip of what it looks like on the river…Many many positive comments, especially from those drift boaters who will be paying on their boats for years to come and who envy that I go where they can’t (don’t want to damage their expensive hard bottoms).
Kris Danes 03/14/2016, 11:23 AM
I am enjoying this boat and think it’s an great way for one person to get out on the water and explore. I haven’t had a passenger yet, but don’t foresee any issues. My weight doest sink the boat down, so it should easily handle all the load you can fit inside. Overall, a good product and a great value.
Sam R., Albuquerque, NM 08/21/2014, 05:04 PM
I bought one of those kaboat things from you guys. I never heard of this before, but I couldn’t pass up the idea for a two-for-one. A boat and a kayak for one price is a great deal. I bought the 13 footer SK385XL, and it meets my expectations as a kayak and as a motor boat. I can go for a nice calm day out kayaking, then slap a little outboard on it and speed up the river. My kaboat is easy to inflate and easy to handle whether I’m paddling or motoring. Plus, I can just leave it in the trunk of my car so I have it whenever I want. Thanks for making it so easy and shipping it right to my door, guys. You’re great!\r\n\r\n\r\n
Rafael Gorinni 07/11/2013, 11:21 AM
After hearing about how convenient they are to store and use, I knew I wanted to buy an inflatable boat. When I went on your site, I saw the KaBoats. I thought it was an awesome idea to combine a kayak with a regular inflatable boat. Seemed like a great way to get more flexibility for your money. I decided on the one that seemed more rugged (SK385XL) and paid the $829. Great Boat!
Write a review