This new and revolutionary product, is a crossover between an inflatable kayak and an inflatable boat – KaBoat! It can be used as a regular kayak, just paddling anywhere you want, ocean, bay, river or lake. If you get tired, use an electric or gas engine installed on marine grade plywood transom.

The 15' SK470 provides more space and comfort compare to popular SK430 model, due to the larger distances between aluminum seats and extra space in the front bow. Longer tubes of SK470 also provides higher buoyancy for more cargo and passengers.Use the KaBoat as an inflatable motor boat with an outboard engine. It can take up to a 10 HP gas outboard engine or portable electric trolling motor.

All new SK470 KaBoats now come with 2(two!) sets of oarlocks in order to select best rowing position, or for attachments of optional second set of oars for tandem rowing. However, it still can be used as a kayak when navigation narrow or shallow places.

The KaBoat is extremely portable and will fit in medium size bag. Now you can go on vacation and take the KaBoat with you along with an optional small electric or gas engine.

The KaBoat's exceptionally stable design allows you to stand, fly fish or even get into those narrow spots where other boats can't go to get the best fishing. Aluminum seats provide excellent support and can be customized by drilling holes and installing folding fishing chairs with a swivel base, or canoe seats for additional back support on a long trips.

Benefits of KaBoat VS. conventional Kayak or Inflatable Boat: 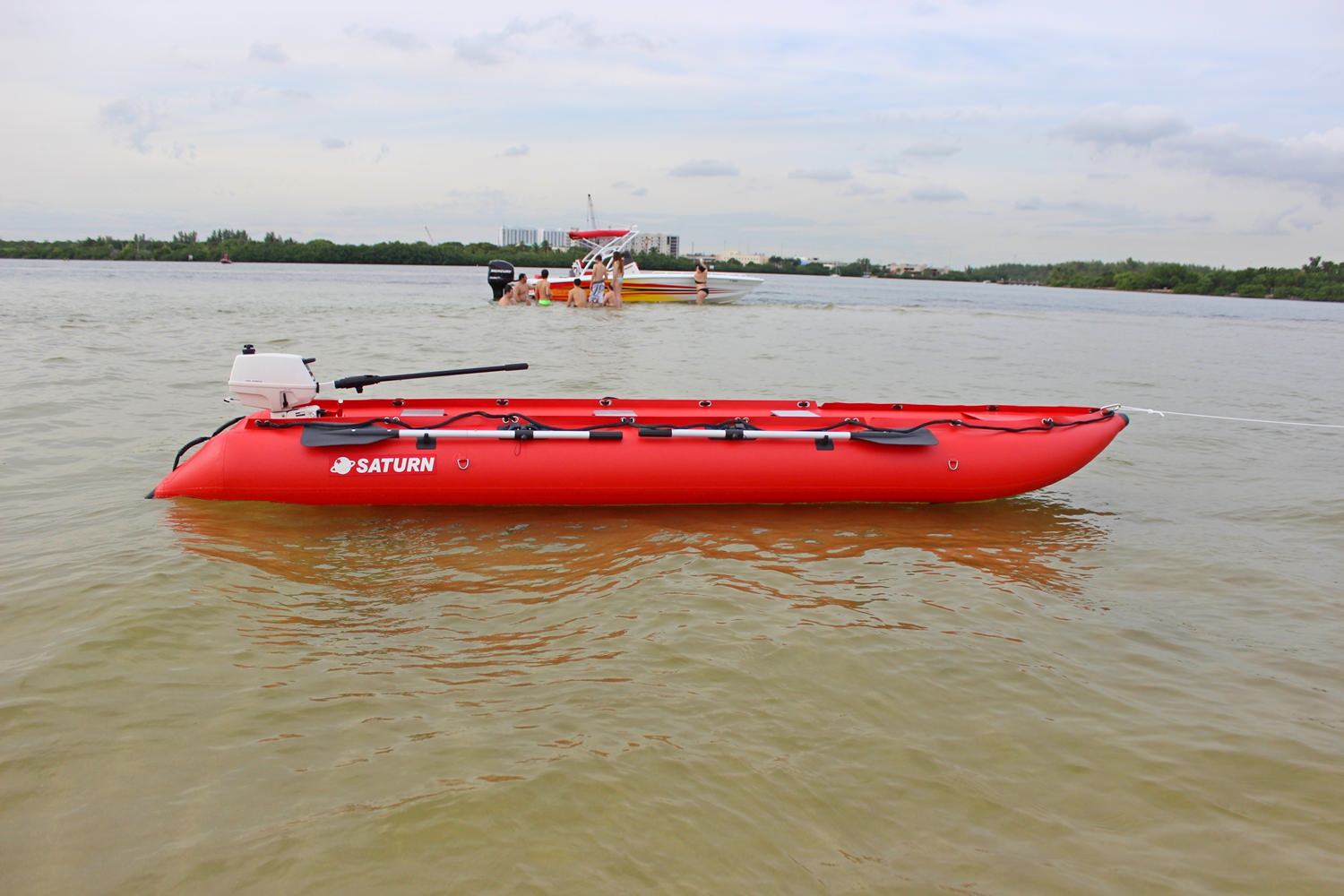 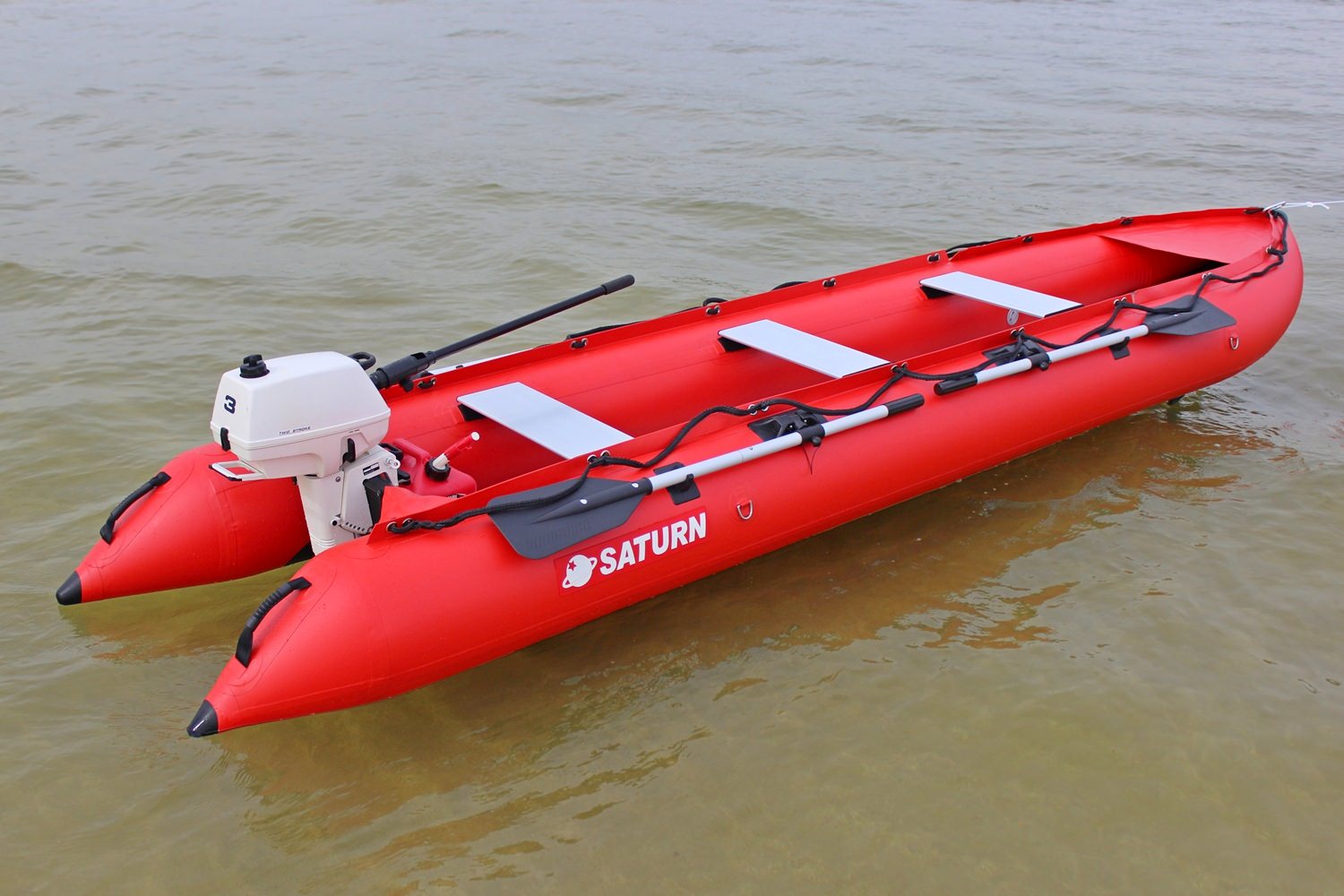 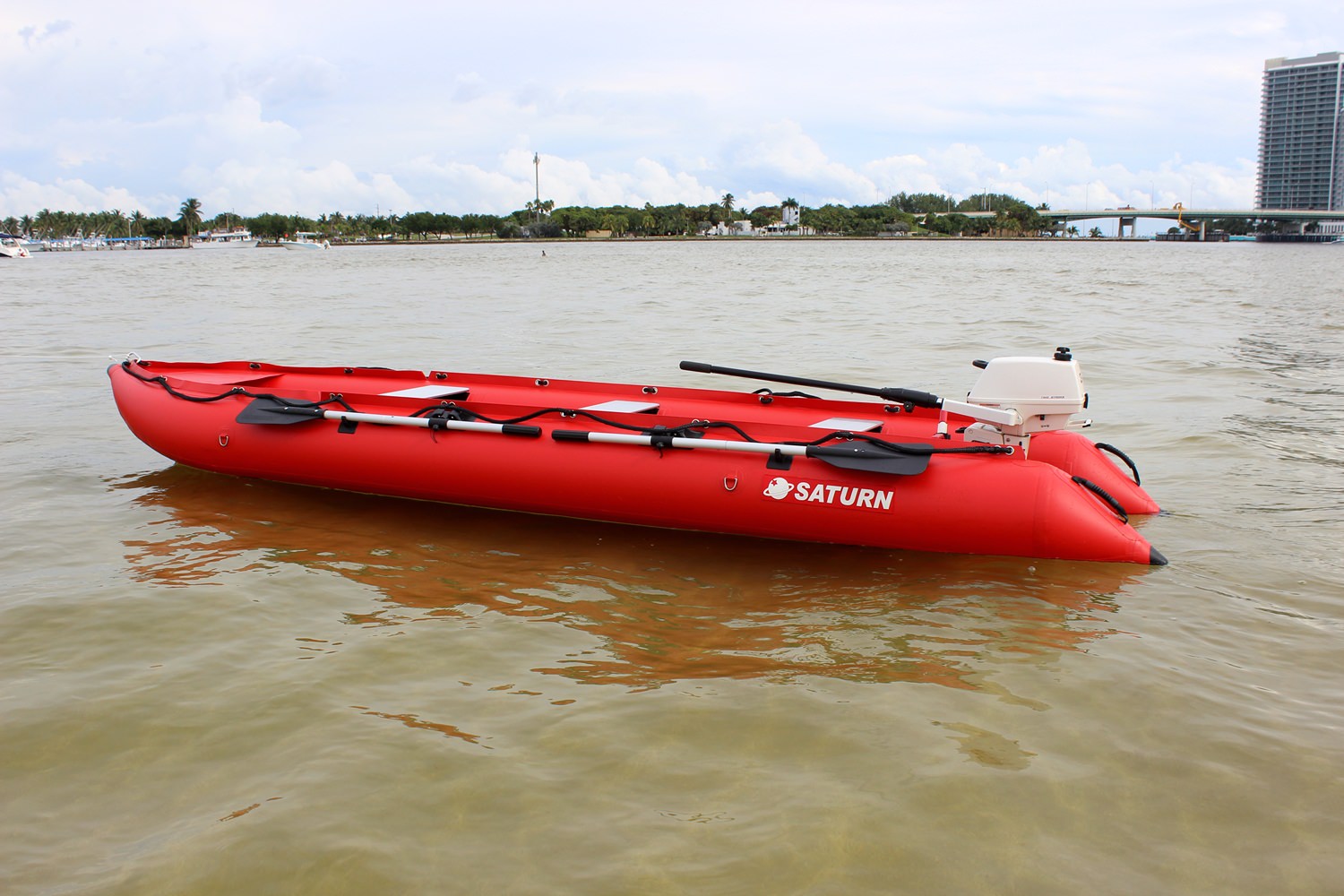 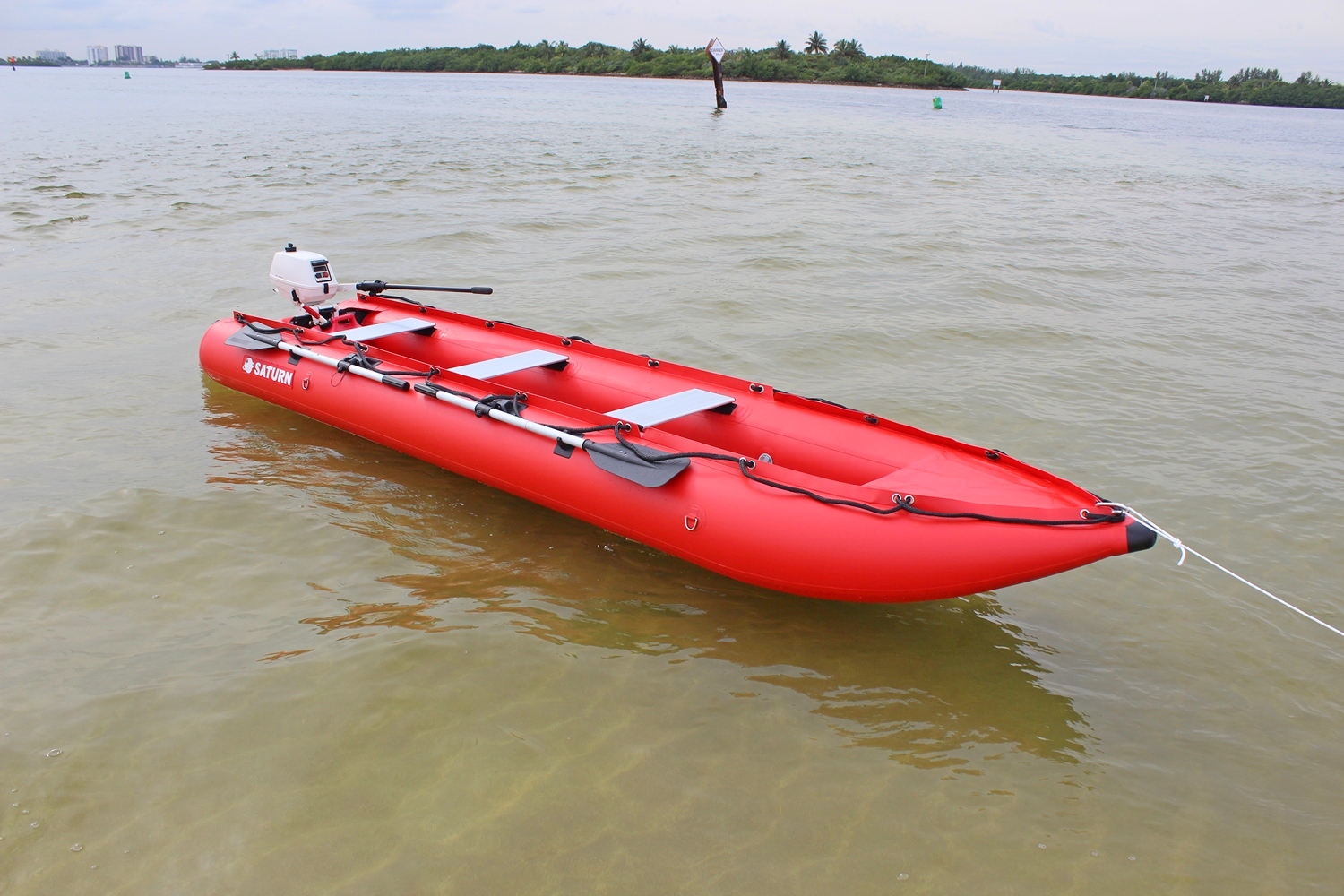 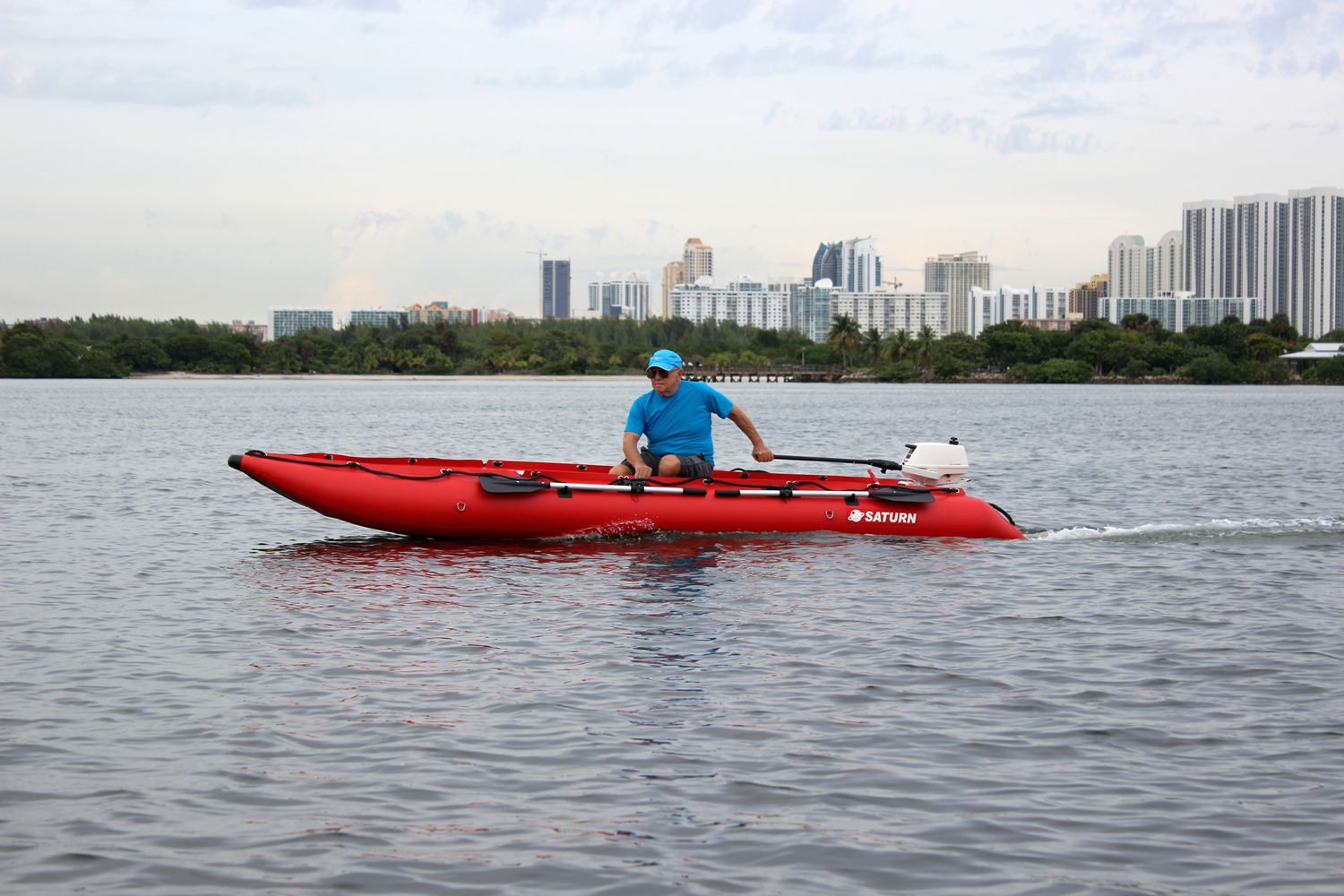 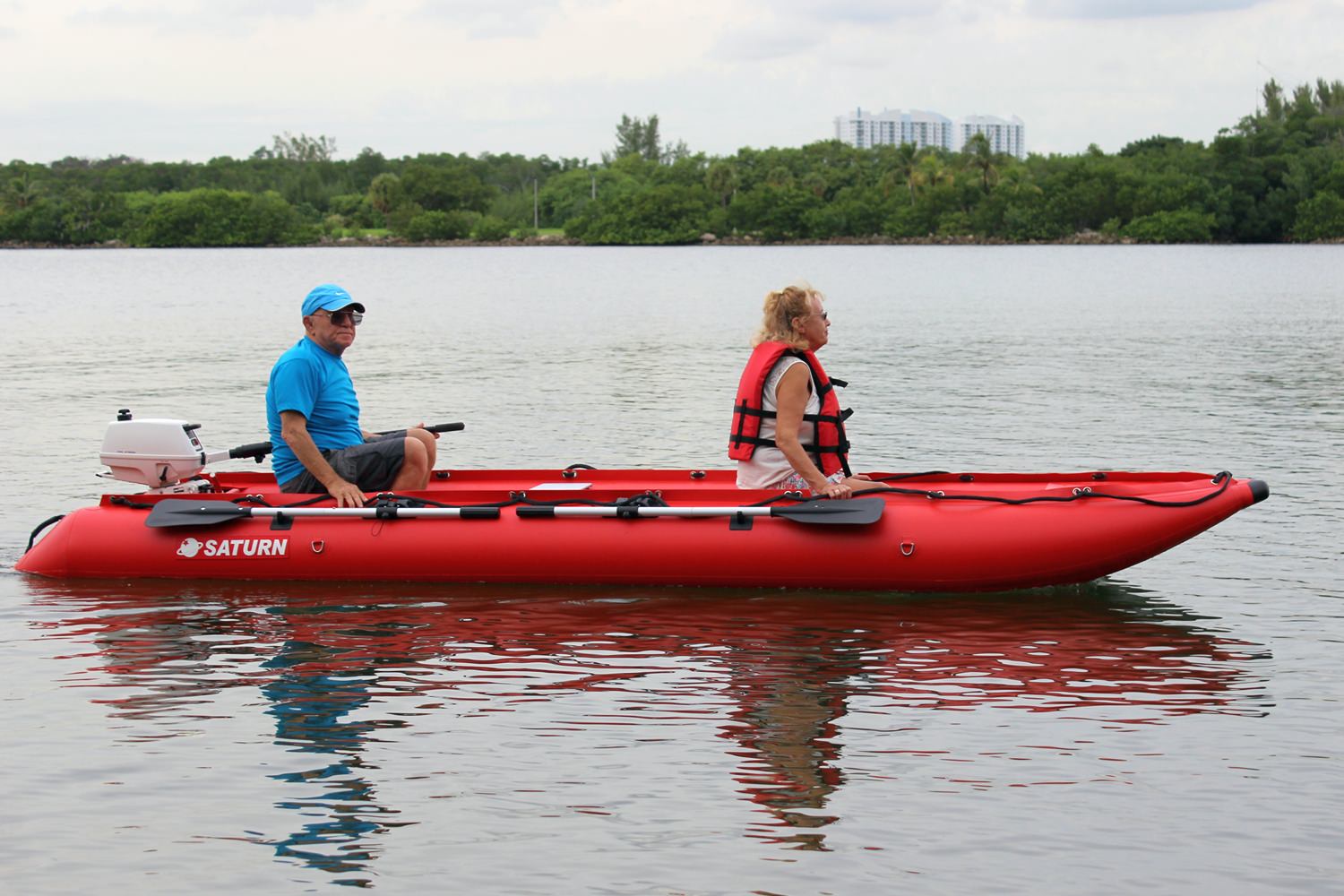 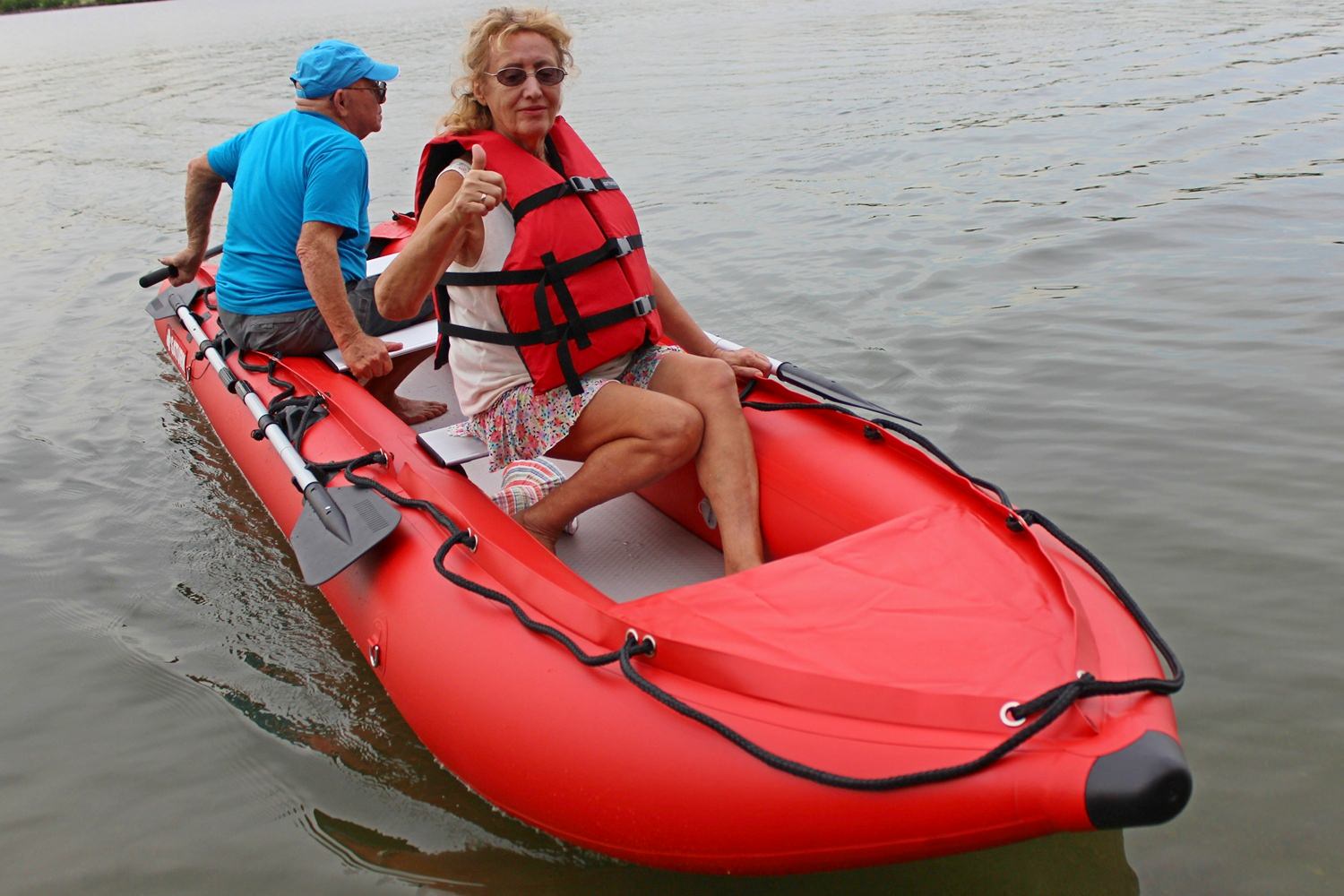 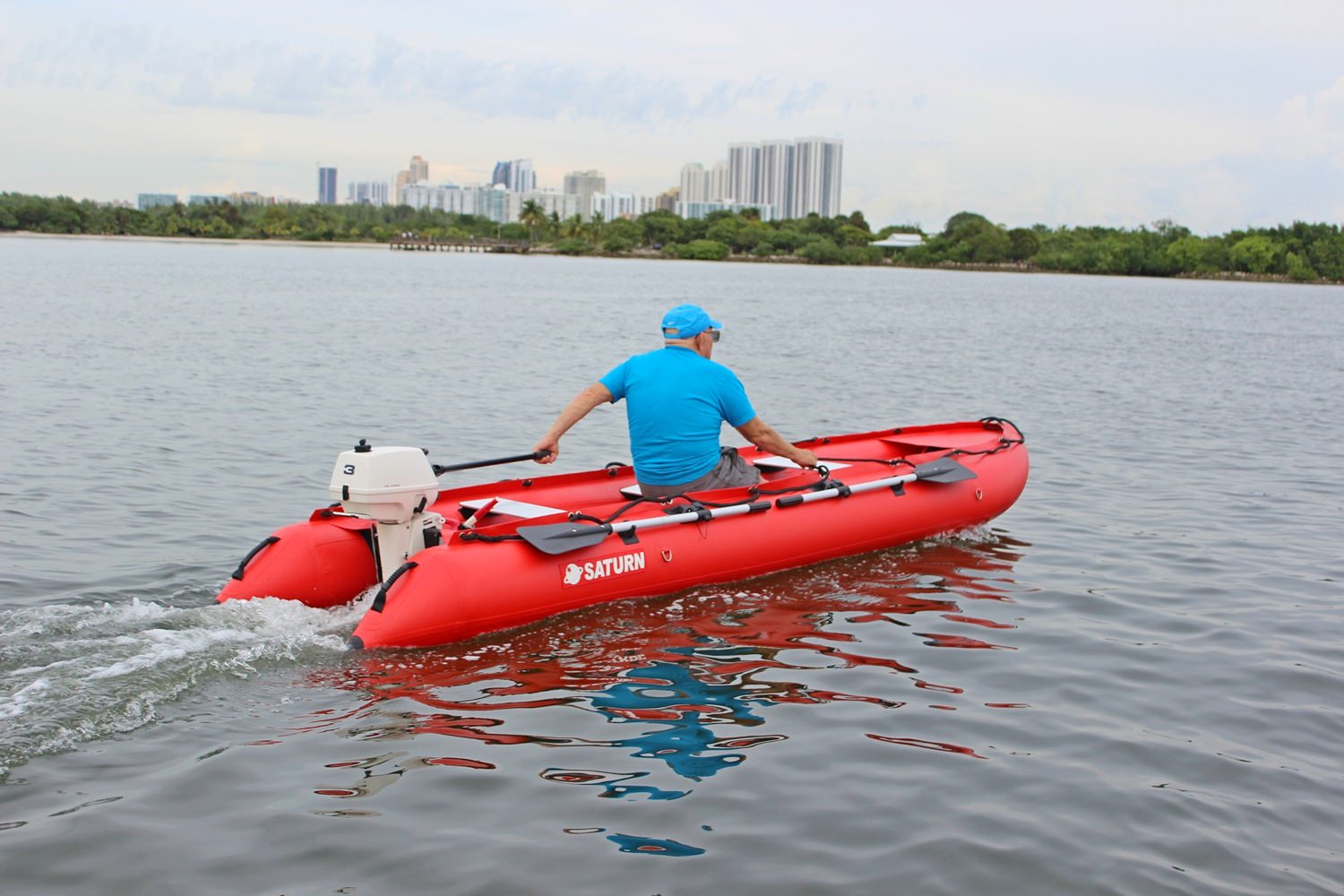 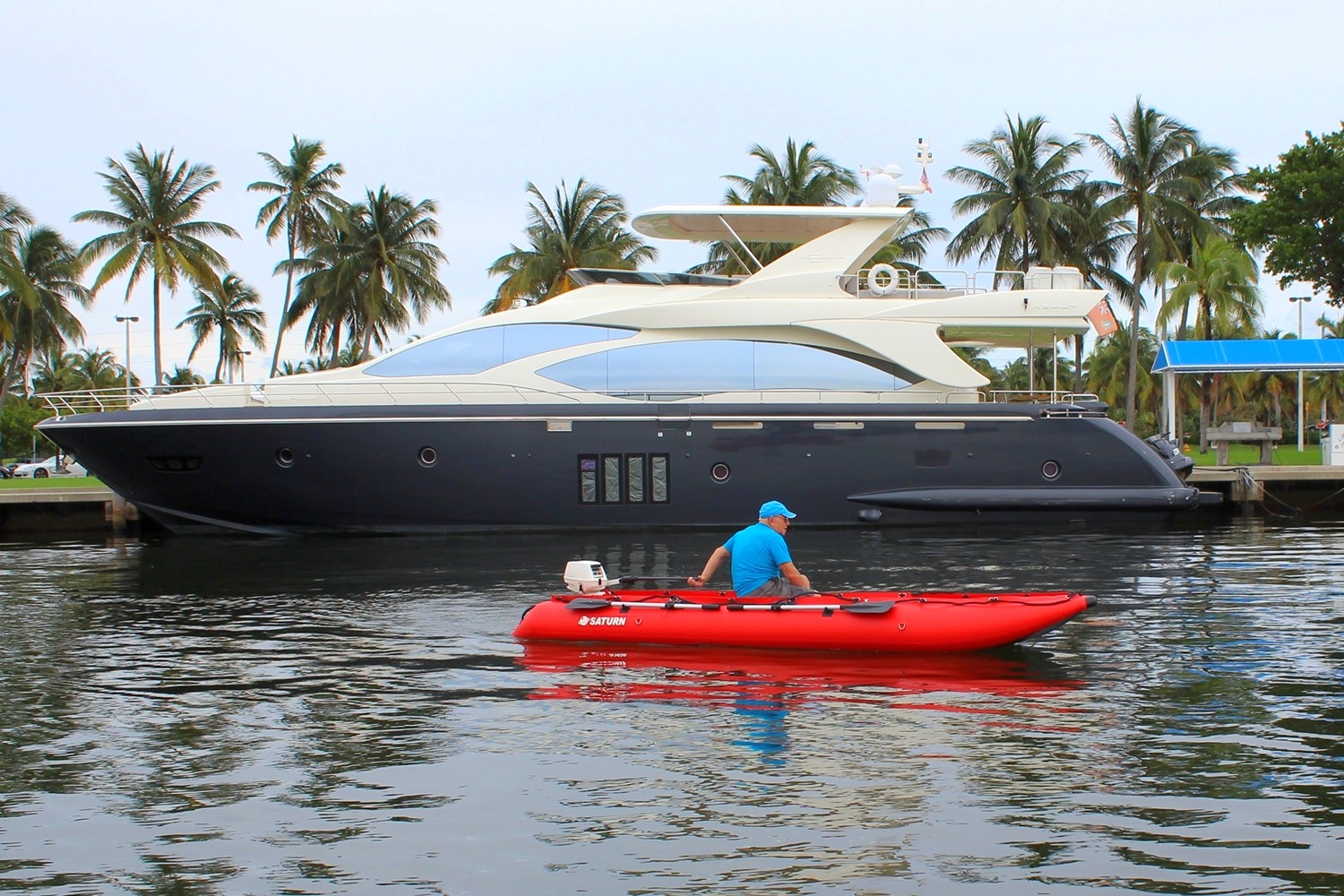 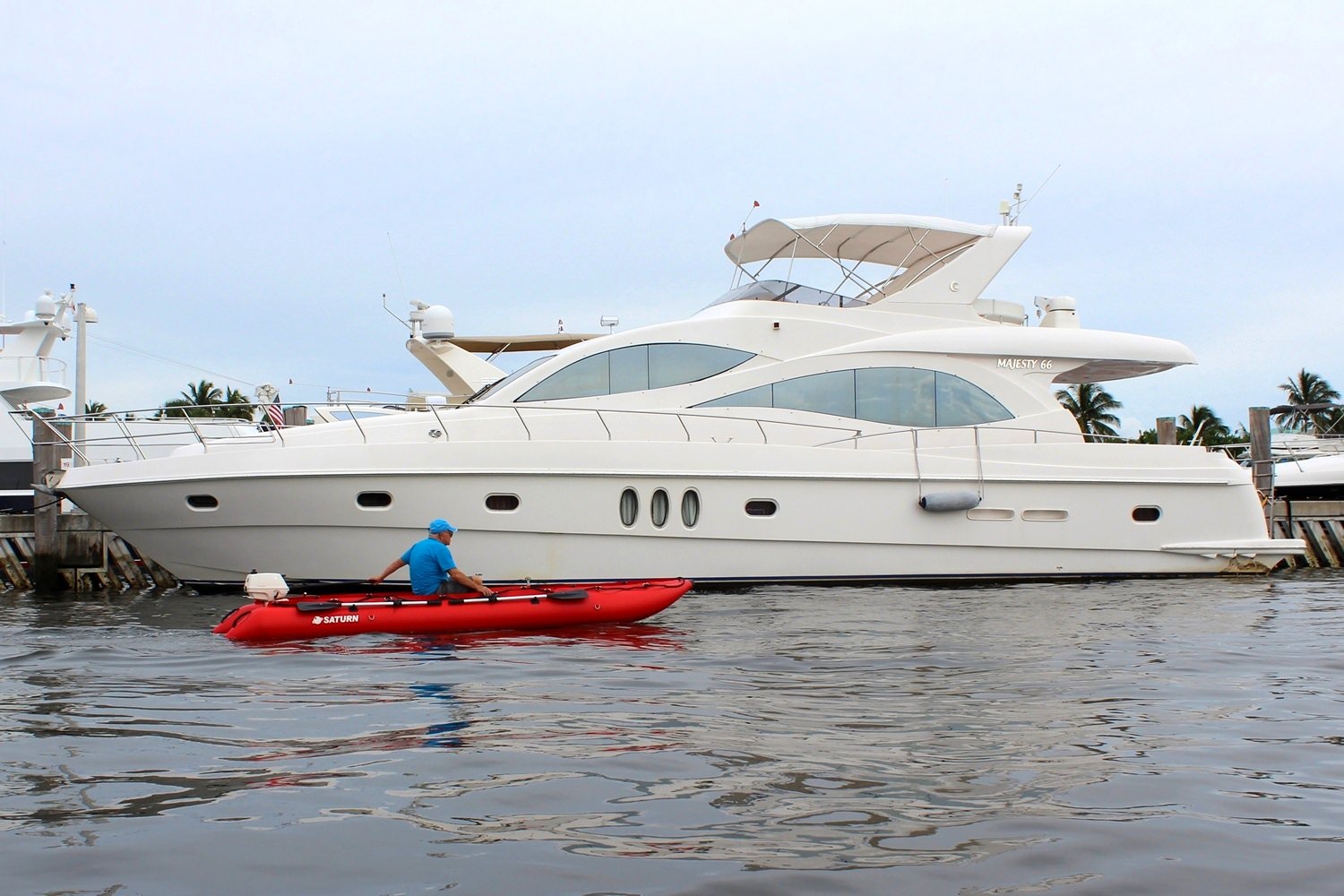 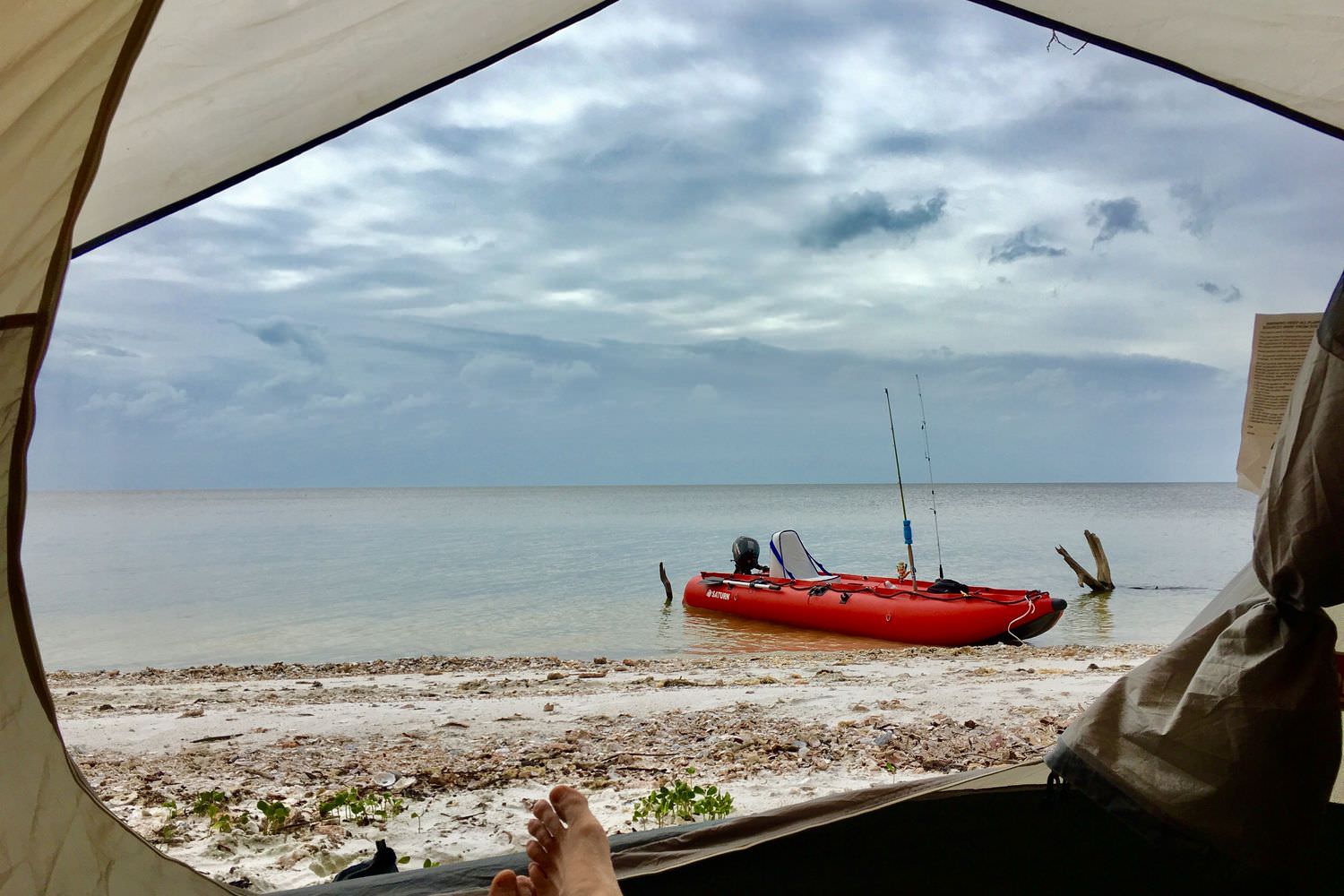 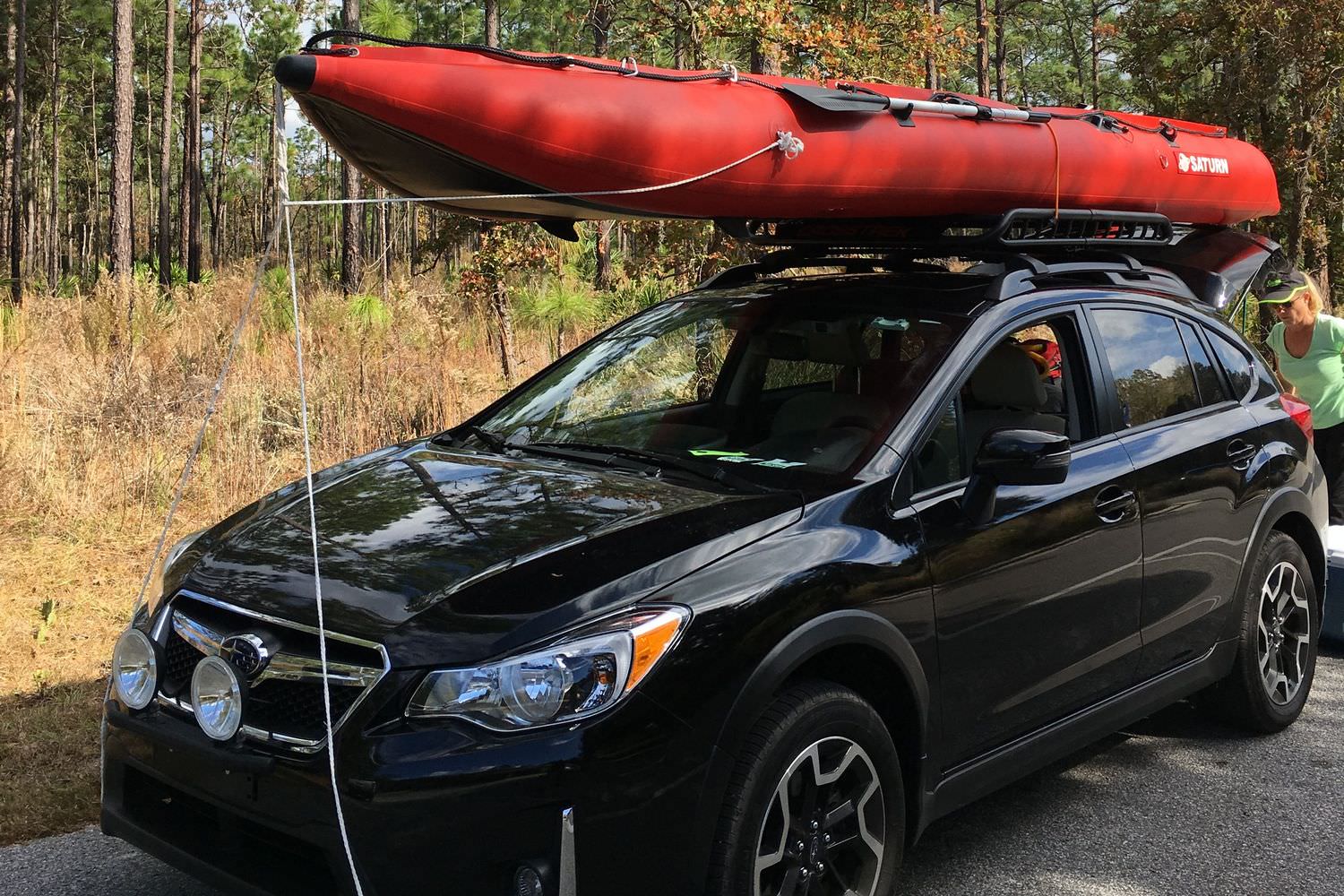 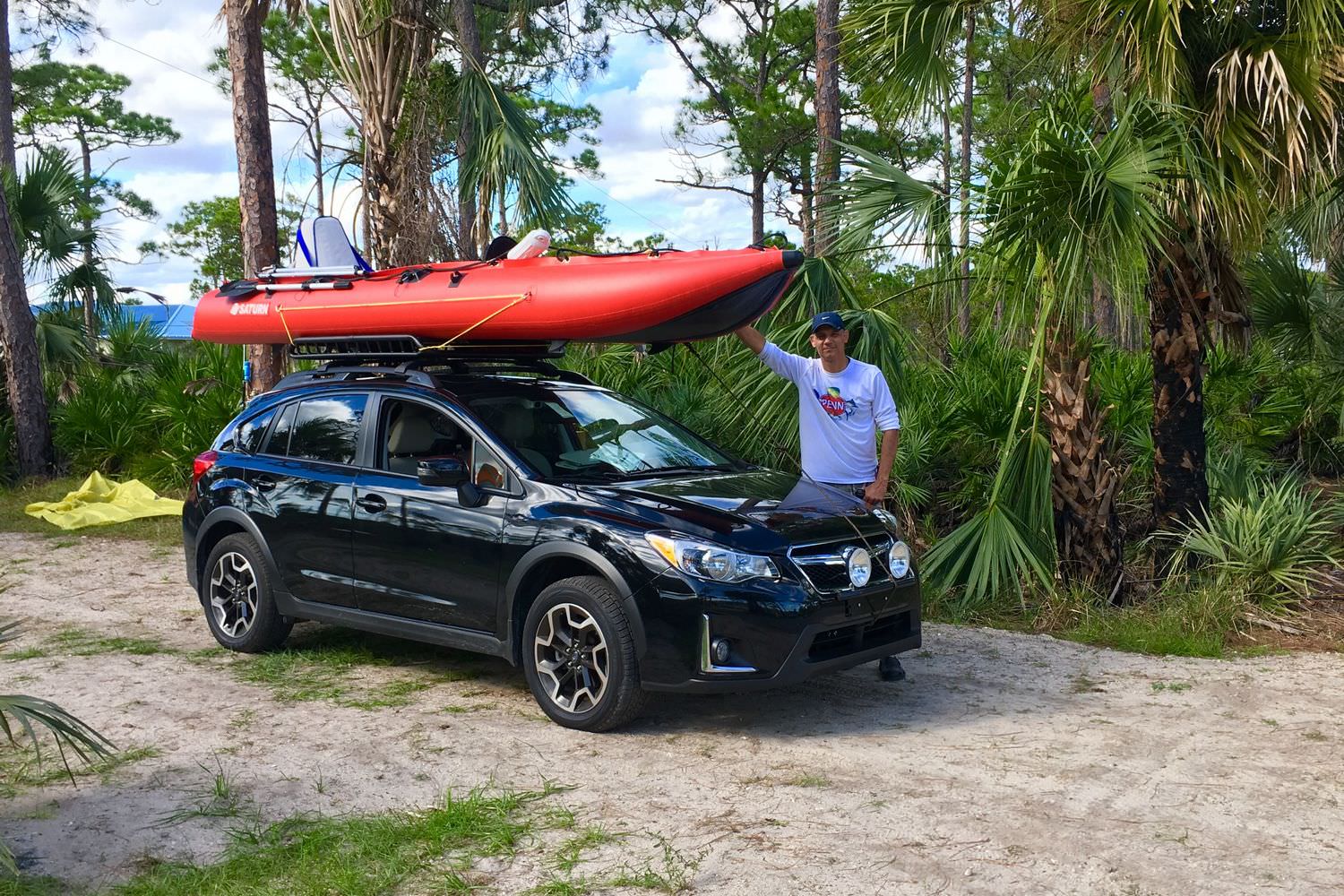 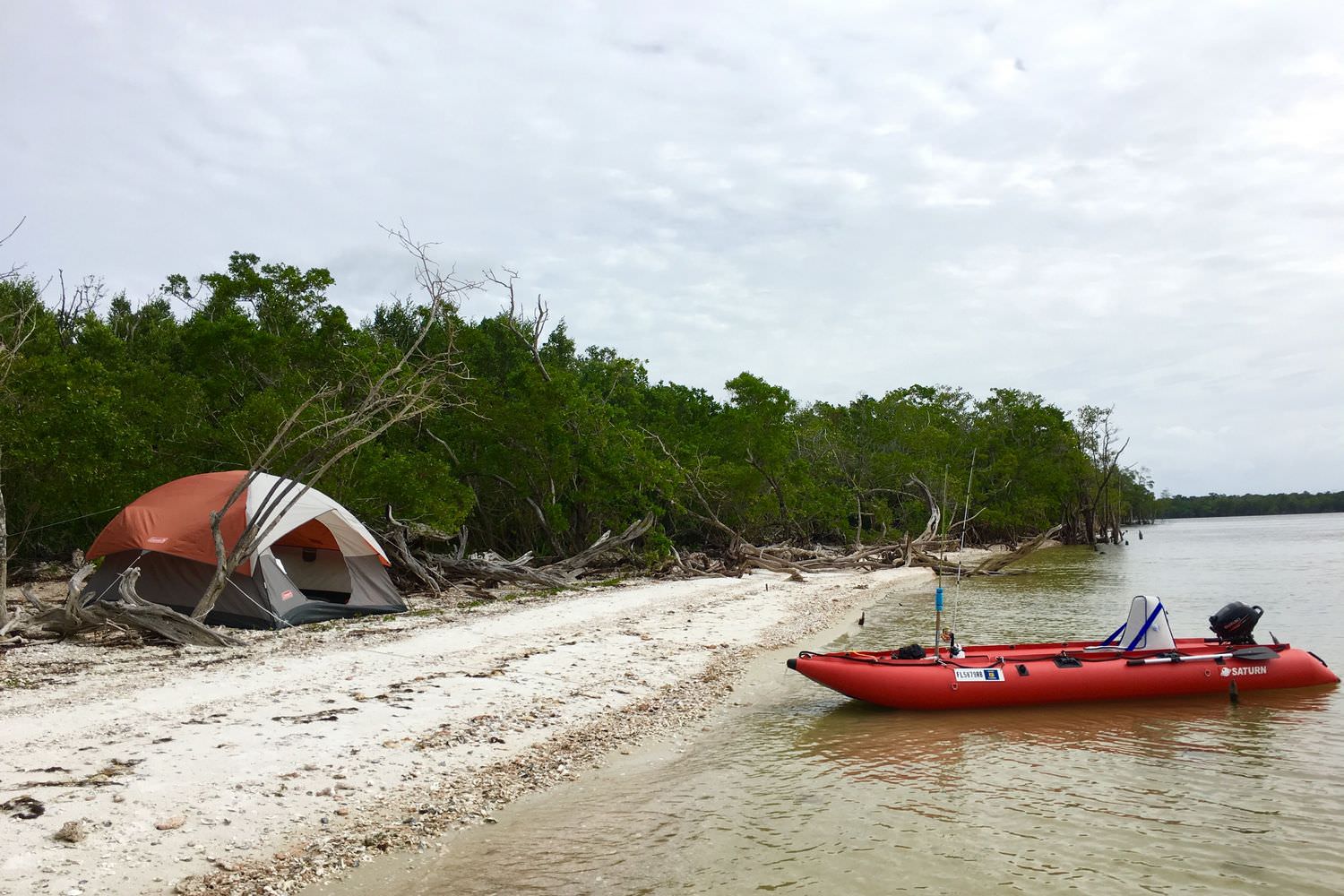 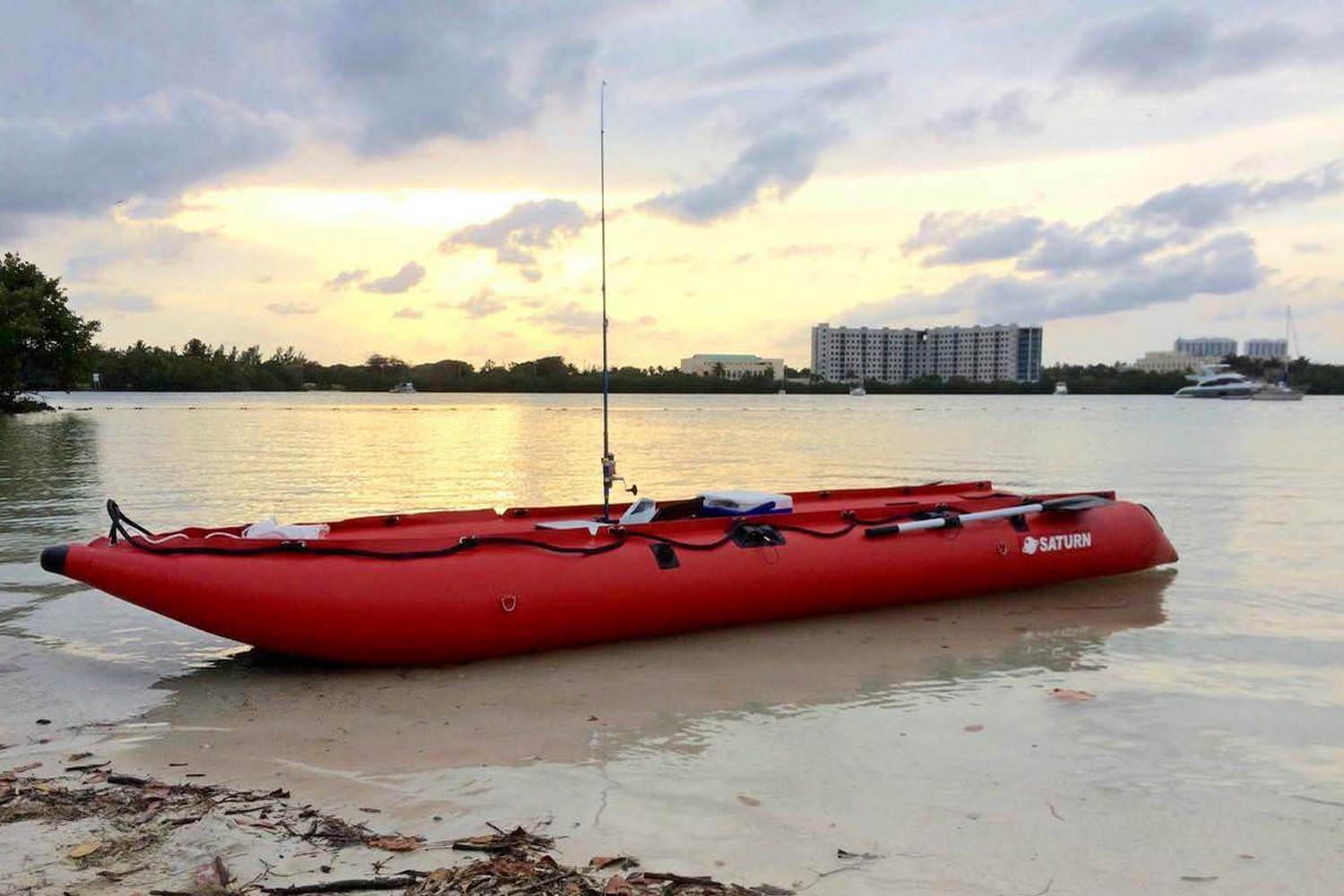 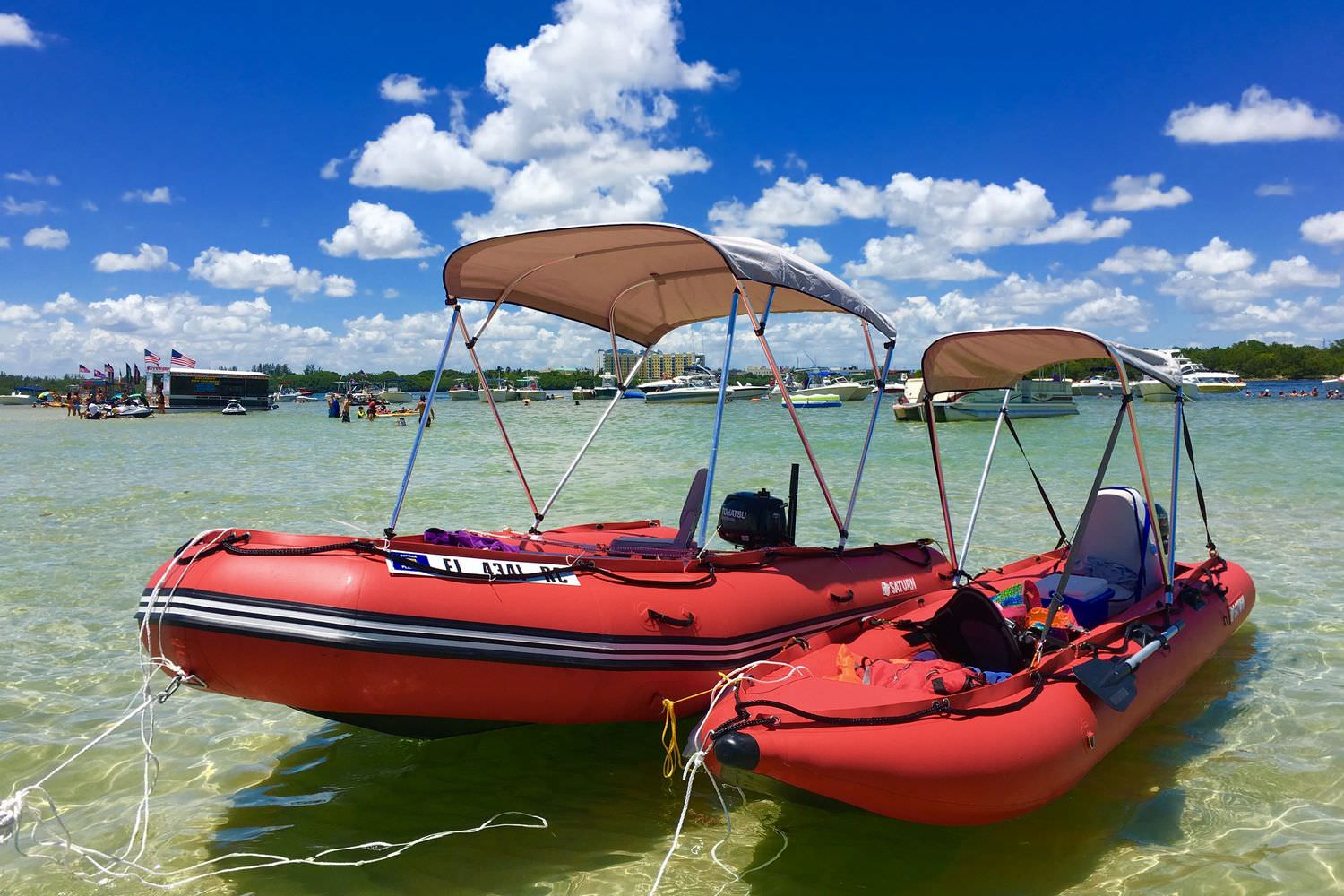 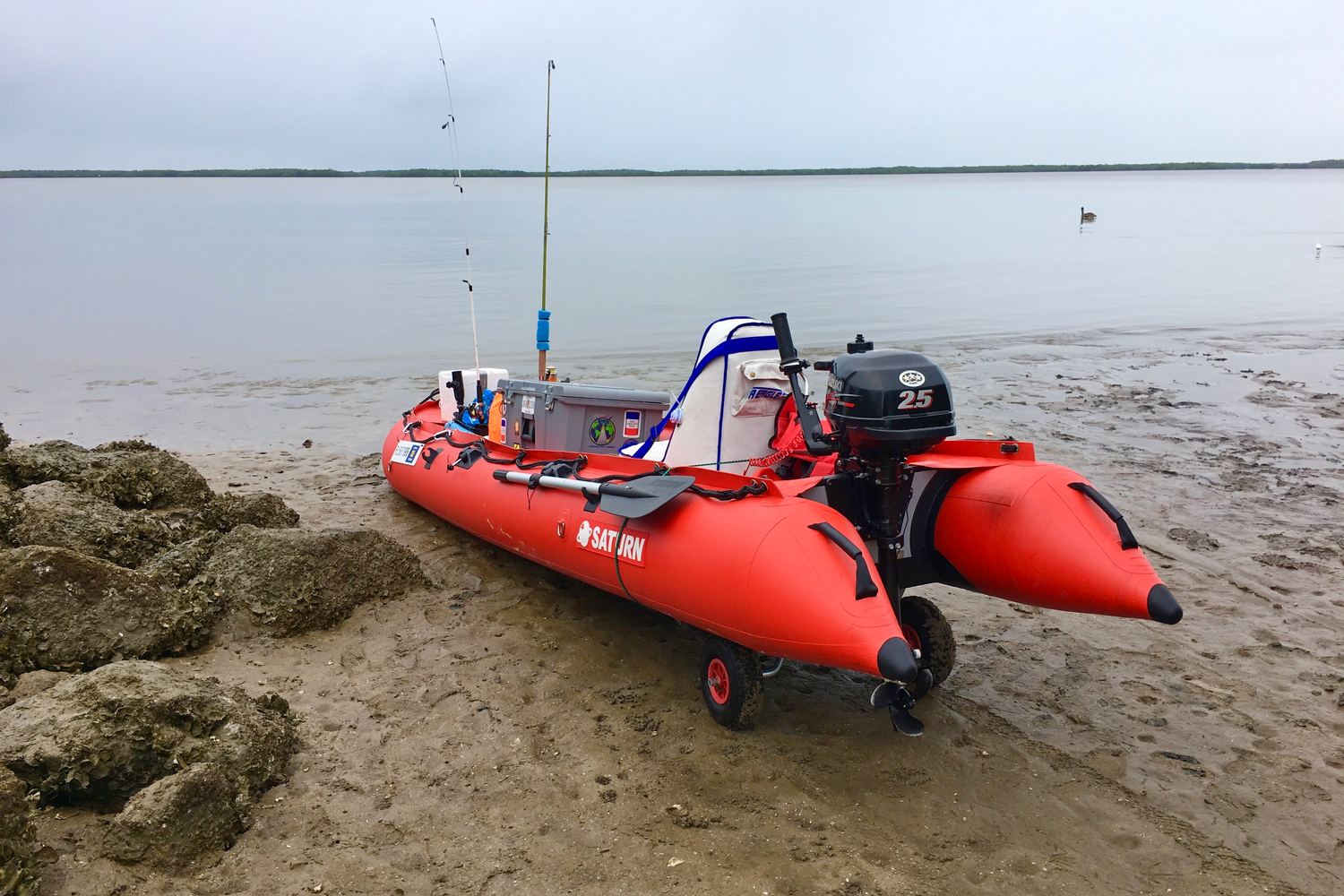 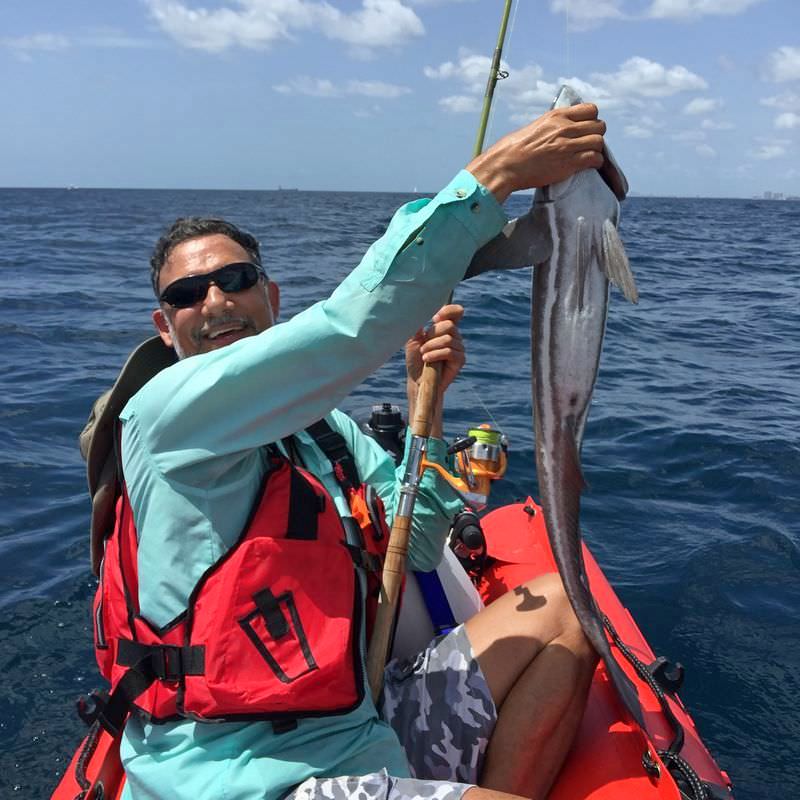 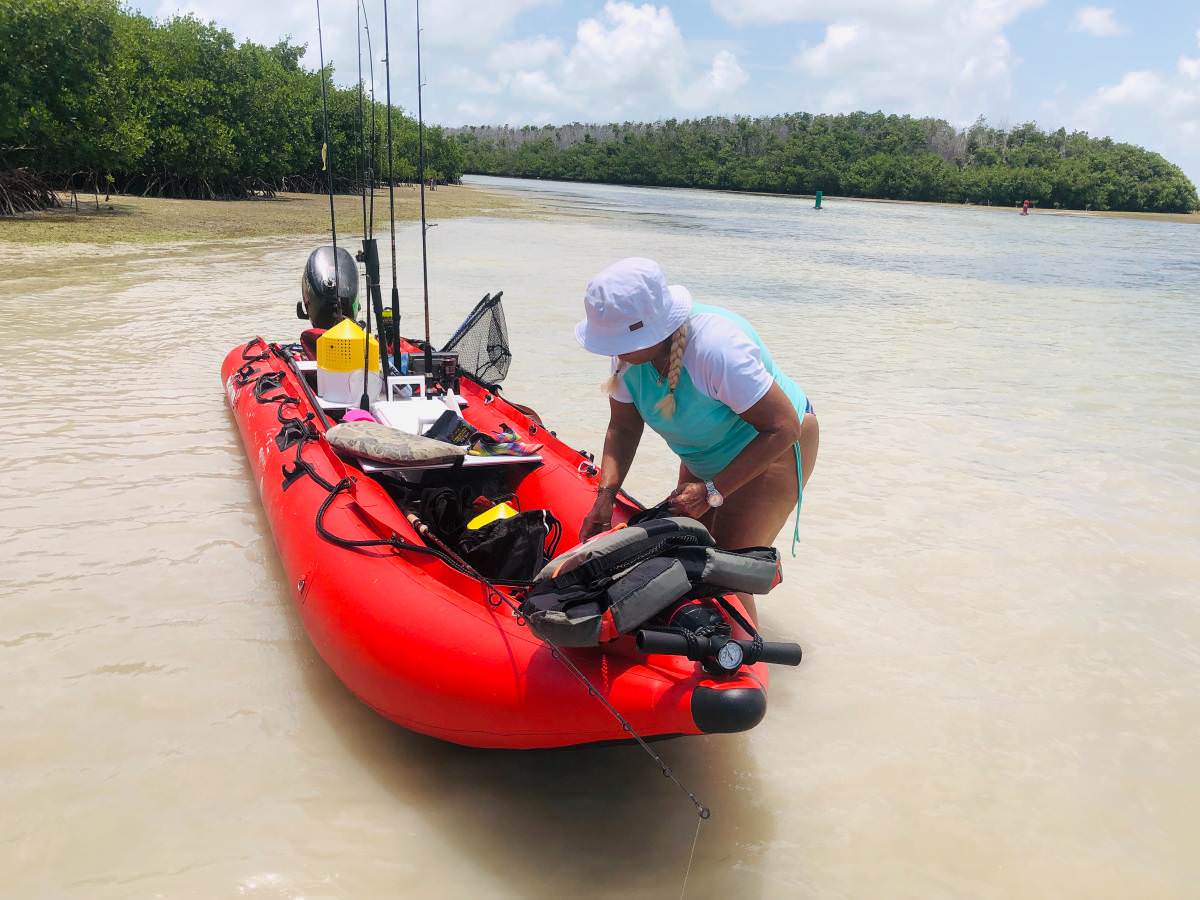 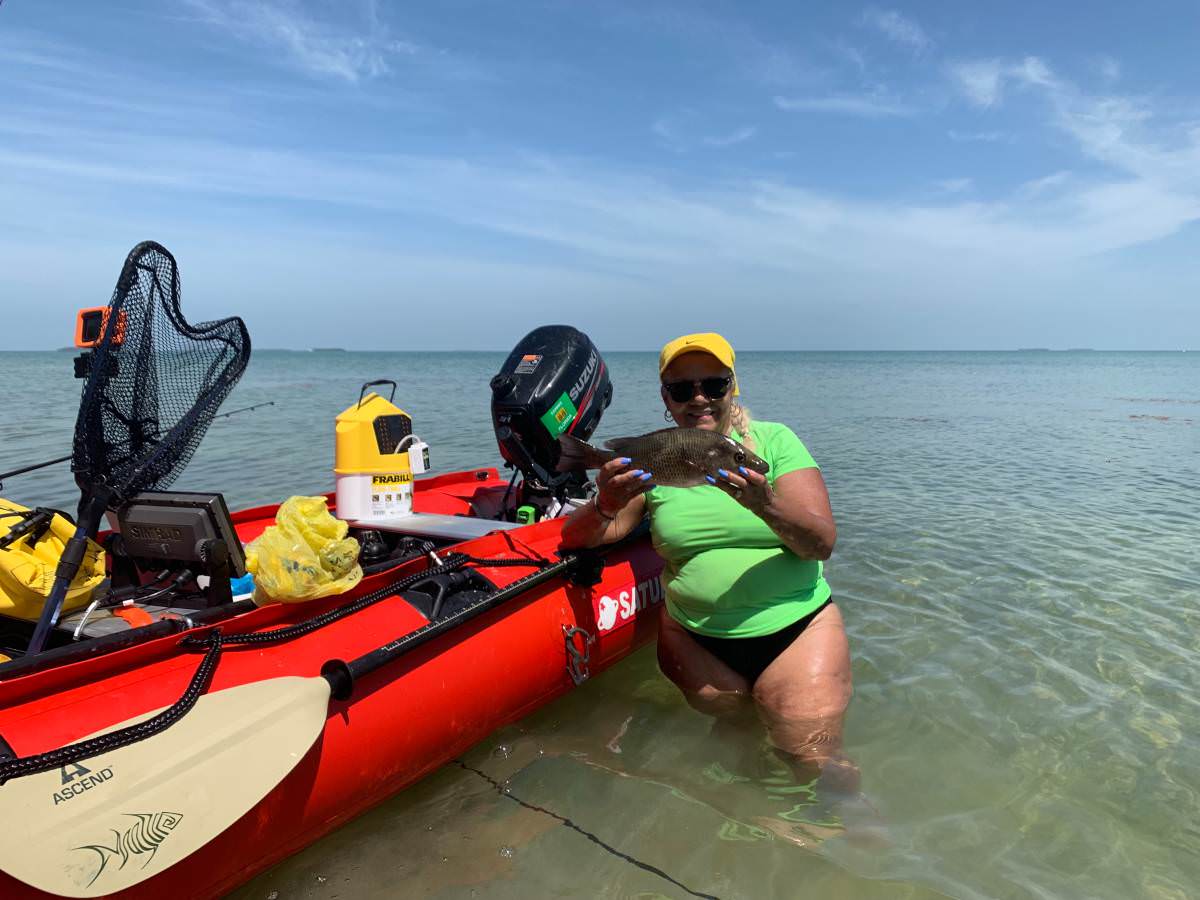 The boat is pretty narrow and I wanted the XL which is just a bit wider but it was out of stock.

JOE, MISSOURI 10/22/2019, 05:16 AM
iVE HAD THIS BOAT ON THE WATER 2X AND NOTICED WATER GETTING IN. iIM ASSUMING ITS LEAKING THRU THE DRAIN VALVE WHICH IS REALLY NOT NEEDED SINCE THE BOAT ITS LIGHT ENOUGH FOR ONE PERSON TO JUST FLIP AFTER USE TO DRAIN. I PUT SILICONE ALL AROUND THE DRAIN PLUG AND TRANSOM ARE AND COMPLETELY SEALED THE DRAIN PLUG. I USE A 55LB THRUST TROLLING MOTOR AND WHEN BACKING UP I NOTICED THE WATER LEVEL RISE. THE OTHER PROBLEM WITHE THE BOAT IS THE REAR SEAT IS TOO CLOSE TO THE BACK AND MAKES IT HAD TO STEAR A MOTOR.

I MODIFIED THE SEATING BY ADDING A COUPLE BOARDS ON TOP THE BENCHES WITH THE TOP ONE EXTENDING OVER THE SIDES TO THE TOP TRIM AND ADDED FOLDING BOAT SEATS TO THE FRONT AND BACK SEAT AND ADDED 2 HEAVY ALUMINUM STABLIZER BARS TO BOTH SIDES AND USED WING NUTS TO MAKE IT EASY TO SET UPAND TAKE DOWN. MAKES NICE PLACE FOR ROD HOLDERS AND ACCESORIES TO LATCH ONTO.

QUALITY WISE THE BOAT MATERIAL SEEMS STURDY AND THE BLOW UP FLOOR IS NICE AND RIGID. I RECOMMEND GETTTING A NICE ELECTRIC PUMP FOR ABOUT $100 AND IT WILL INFLAT EIN ABOUT 15 MINUTES TOTAL AND GET A KAYAK CART TO SIT IT ON TO MOVE AROUND. YOU WILL BE BALE TO MOVE IT FULLY LOADED. DONT BOTHER WITH ATTACABLE WHEELS NOT ENOUGH ROOM ON TRANSOM WITH MOTOR. THE EXTRA LONG TUBES EXTEND PAST THE TRANSOM SO YOU WILL NEED TO KEEP THE PROP LOWER IN THE WATER WHICH TAKES AWAY FORM SHALLOW WATER EXCURSIONS. PROBABLY NEED ATLEAST 10" TO A FOOT OF WATER TO TRAVEL ON WITH MOTOR. IT FEELS STABLE WHEN IN THE WATER. TOO NARROW TO REALLY WALK AROUND ON COMFORTABLY. CUT SOME CARPET FOR THE FLOOR WHICH IS NICE AND USE A COUPLE CUT BOARDS IN THE MIDDLE WITH CARPET ON TOP TO MAKE A NICE TABLE BETWEEN SEATS.

30 MINUTES TO SET UP AND TAKE DOWN WITH ANY MODIFICATIONS TO SEATING MOTOR BATTERY ETC EASILY FITS INTO HATCHBACK WITH REAR SEATS FOLDED DOWN WITH ALL EQUIPMENT.

POOR DESIGN BUT CHEAP AND WITH A FEW MODIFICATIONS YOU CAN MAKE A NICE FISHING BOAT FOR 2 PEOPLE WITH COMFORTABLE SEATING AND NICE MOTOR RECOMMEND 55LB THRUST TROLLING MOTOR. DISTRIBUTE WEIGHT EVENLY PUT BATTERY IN MIDDLE OR FRONT DEPENDING ON MOTOR AND THE BOAT TRAVELS NICELY. HAVENT PADDLED MUCH BUT WHEN I DID IT WAS SUPER EASY TO MOVE AROUND....NEVER USED THE OARS...AGAIN POOR DESIGN MAKES THEM USELESS WITH WHERE THE SEATING IS LOCATED AND THE LOW OAR LINKS. IF I HAD TO DO IT AGAIN ID GO WITH THE XL VERSION BUT THTS 2X AS MUCH AND I DONT REALLY NEED IT BUT THE EXTRA WIDTH WOULD BE NICE BUT THE NARROW DESING MAKES FOR EASY TRAVELING ON WATER.

BOATS TO GO DID A NICE JOB DELIVERY AND PAPER WORK FOR REGISTRATION DIDNT HAVE ANY ISSUES THERE.

ITS VERY FUNCTIONAL AND RECOMMEND BUT WOULD RECOMMEND MODIFYING SEATING WHICH IS EASY TO DO. DOESNT TAKE UP A LOT OF SPACE WHEN FOLDED BACK UP.

JD 07/06/2019, 05:47 PM
What an awesome boat!! This was my first boat and got me on the water zipping around and without trailer or towing capacity. Boat, oars, pump, and 8 hp Mercury outboard engine all fit neatly into the sedan trunk. It is a rugged, go anywhere boat and a ton of fun.
Rick Barnes 01/16/2019, 11:19 AM
Love the Kaboat. It doesn't require a lot of horsepower to cut through the water with ease. This fits in the back of a sedan so if you don't have much space and want to own a boat, go for the Kaboat.
William Stevens 01/04/2019, 11:15 AM
I purchased the SK470R and love it. The boat is better quality than expected and is great since I live in a small apartment. Set up time from the back of my sedan to water is about 5 minutes, I can often set it up and be out in the water before larger solid-hull boats can get off of their trailers and going. With my small outboard this things zips and since it doesn't weigh much at all, I barely use a gallon of gas all day. Anyways it's a fantastic boat that I can afford on a college budget.
Jonis Graham 09/16/2018, 11:17 AM
The SK470 was everything I could have imagined in a quality boat, and more. I've taken it to 5 different lakes so far, and the performance of the boat has surprised me and those around every time. We even sat 3 adults comfortably on the boat in a lake for an hour, without leaving a scratch on the kaboat. After receiving this boat and taking it out, it has turned fishing into a fully fledged hobby!
Justin 01/04/2018, 11:58 AM
I gave this boat 4/5 stars because there are some minor quality improvements to be made, although I’m very happy with the product overall - especially the performance and price.

On the quality: I noticed three things once I got the boat 1) the aluminum seats are a bit too long and so they slip out of the grommets once the boat is inflated if you try to carry it around 2) one of the tube air valves is installed very low to the floor and so it is difficult to connect the hose and top off the pressure 3) the drain valve was sealed using clear RTV silicone, which does not stick to the plastic or wood hardly at all. I peeled this off, sanded , and sealed the area using 3M 5200 so that the transom wood doesnt rot out from moisture. Overall, the PVC materials are thick enough and have been durable while dragging the boat over rocks and logs.

On the performance: I’ve used my SK470 with a 6hp Tohatsu - it pushes the boat and a 220 lb load to 16.5 MPH. One thing to note is you MUST place the weight in the middle of the boat for proper performance and stability. I use a 3 ft tiller extension made from 1.5” PVC with 4 slots cut in the end to form a collet. It’s held in place with two hose clamps and works great. If you sit in the middle of the boat then there is no on-plane/off-plane sensation. You can travel at any speed and the boat simply stays flat and rises slightly higher out of the water as it goes faster. It cruises well at any speed and so even a 2.5 hp engine would push this boat along nicely - something not possible with wide boats due to the extra form drag. If you drive from the back seat then the boat performs poorly and I assume that’s why some other reviews mention poor stability. If all the weight is at the stern then the bow rises into the air and the boat has a definite planing speed of about 11-12 MPH and it is WAY less stable between 5 and 11 MPH since the bow is just pointing into the air. Even when on plane it would be easy to flip the boat if you steered sharply and had your weight at the very back end, but this isn’t a problem when the boat is balanced. At rest, the boat is FAR more stable than a canoe since the straight sides place more boyancy at the edges. I usually just sit on one tube whether traveling or still and don’t feel like it’s ever going to tip over. Also, the boat is light enough for me to lift and launch or retrieve alone. Overall, excellent performance.

I am enjoying this boat and think it’s an excellent way for one person to get out on the water and explore remote areas. I haven’t had a passenger yet, but don’t foresee any issues. My weight barely sinks the boat down, so it should easily handle all the load you can fit inside. Overall, a good product and a great value.
1 2
Write a review