What is the Best Way to Tow an Inflatable Dingy?

The towing of an inflatable boat, raft, or dingy requires the use of a towing bridle. Never tow an inflatable boat by the centrally located D-Ring located at the point of the bow, with the integrated handle. Always tow from the two D-Rings often called pad eyes, located on the sides of the bow. That is the best way to tow inflatable boats, using D-rings on a sides of bow area.

The most commonly made mistake that occurs when towing an inflatable raft, boat or dingy, is the improper use of the towing bridle. Many boaters fix the tow lines to D-Rings and then tightly knot those lines to the bridle. That is wrong, and will cause excessive wear to the pad eyes on the dingy. Also, it will cause the inflatable raft or dingy to become unstable and could capsize it, while in tow. One of the most common problems a dingy has while being towed is shipping on water. This can be easily remedied with the proper rigging of the tow bridle to pull inflatable boat behind mainship, yacht or sailboat.

The correct way to attach a tow bridle to inflatable boats is to slide the end of the tow line through the bridle, creating a loop with which the bridle will slide back and forth with the shifting of the dingy in the water. This will distribute the tension on the pad eyes from one to the other, depending on which pad eye has the most load. When the towline can shift, it allows the inflatable sea boat to remain stable and not take on water, or remain stiffly attached in rough seas.

One of the many ancillary issues is what equipment to keep in the inflatable dingy that is being towed. That is a difficult question to answer because the sea’s, wide rivers and lakes, or any larger bodies of water are difficult to judge. One minute the seas are calm and literally the next minute they are running ten foot waves from heavy winds. You wouldn’t want a stiff towline to hamper progress, or even lose the equipment stowed on it, or even the dingy itself, just because the towing bridle wasn’t properly rigged.

When it comes to stowing equipment many sailors have small outboard motors for their inflatable sea dingy. It is common enough that it is often seen that the motors end up overboard, or water logged from the dingy shipping water aboard. The tow load is increased substantially when an outboard motor is either in the dingy, or still on the transom. Even the best stowed motor can weigh the dingy to one side or the other, causing the dingy to list badly, and even capsize.

The most likely problem experienced by boaters and even seasoned watermen is shipping water onboard while towing the inflatable sea craft. This problem is just made worse by rigging the tow bridle wrong and causing the dingy to list and take on water. Even the best self-bailing inflatable sea boat will take and keep water if dipped often enough during a bad tow. The best defense is to learn how to rig the towline and beat this issue before it ever starts. 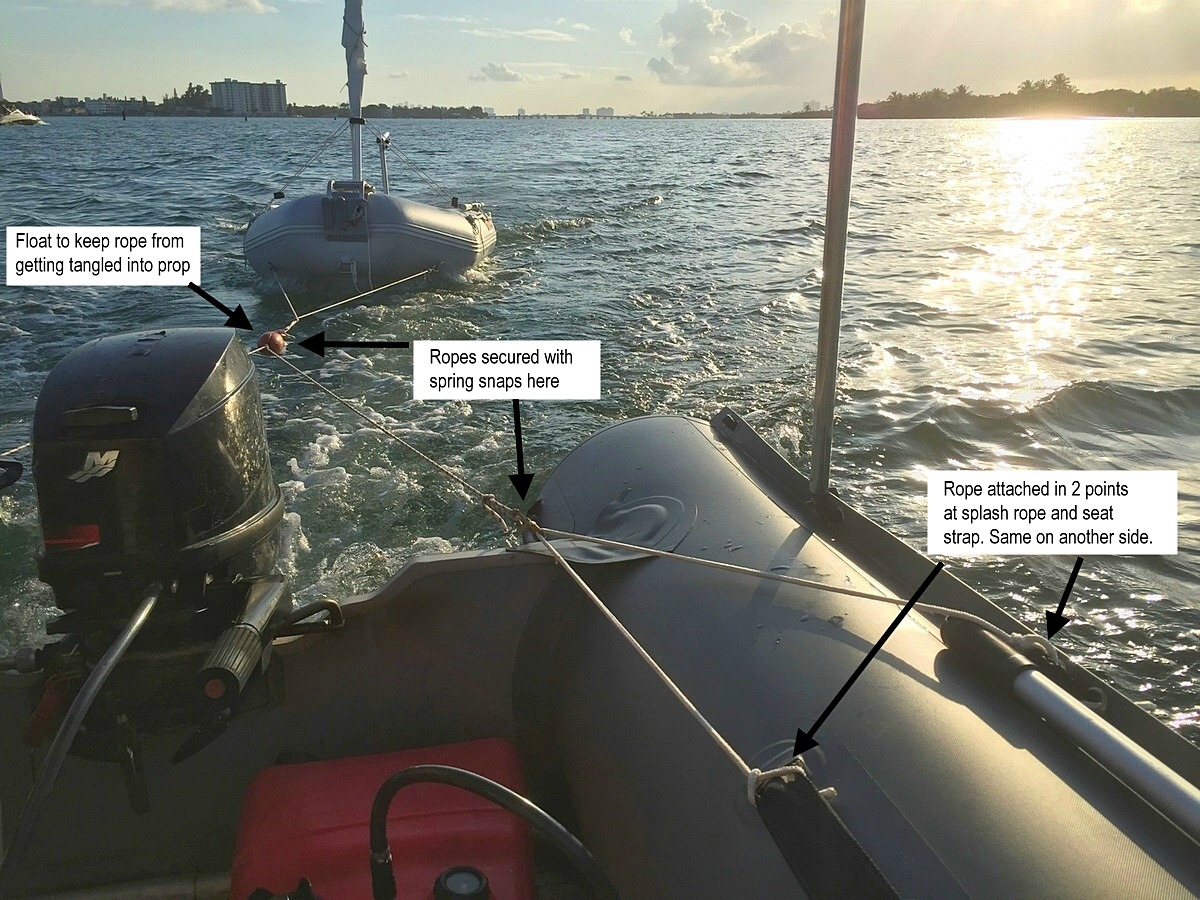